Some of the pigments used in ink contain metallic substances which are harmful to human health and the environment such as cadmium, chromium, lead and mercury. Conventional printing inks are petroleum – based and used with alcohol-based solvents. As alcohol and petroleum evaporate Volatile Organic Compounds (VOCs) are emitted.

VOCs represent environmental pollution and a health hazard to pressroom workers. In terms of atmospheric pollution, VOCs react with nitrogen oxides in the presence of sunlight to create ozone pollution or photochemical smog.

Offset inks typically consist to 30 % of mineral oils. Using eco-inks, also known as eco-solvent inks and green inks, can cut down on the consumption of fossil fuels. These products use modified vegetable oils instead, such as linseed or soy esters. Eco-inks are already widely used in some markets. The differences in reproduction quality and processing are hardly noticeable.

Ecological inks are often called and alternative inks, because opposed to the classic, conventional inks have reduced content of substances that are harmful to the work and / or the environment, in fact these are inks in which harmful components are completely replaced by other, less harmful or harmless substances.

For example, in offset printing, alcohol based inks, which emit more than 30% of volatile organic compounds (VOC) can (depending on the application), be replaced with inks  that can dry with radiation electron beam influence, with the beam of UV radiation or with inks based on soy, water, or dry waterless inks. With proper selection of alternative binders can be reduced the amount of consumed ink without dropping the quality of the printed impression. Choice of ink depends on the printing process, the substrate and the use of the product.

The Inks Based On Vegetable Oils

The inks based on vegetable oils are used only in flat printing technique. Inks based on soybean oil can replace 20-40% of alcohol-based inks. Reduction of volatile organic compounds in the application of these inks is as high as 80%. This percentage is lower if still are used solvents during cleaning. Inks based on soybean oil are significantly more expensive than alcohol-based inks and require a longer drying time, without increasing the heat drying.

Benefits of inks based on vegetable oil are:

lower emissions of volatile organic compounds into the atmosphere, as compared to the traditional inks

washing of cylinders and containers can be carried out with the help of chemicals based on water or detergents, which reduces the use of highly concentrated solutions of various chemicals

smaller quantities of waste paper, since the ink-water balance is achieved more easily

The negative side of using inks based on soybean oil is longer drying time, higher costs compared to standard inks and demanding adjustment prior to printing, as well as staff training.

In water-based inks solvent component has been replaced by water so the organic component of the solvent is eliminated and the share of VOC emissions is reduced. The use of these inks is limited due to the inability of ink drying on non-absorbent printing substrates. The best use of these inks is in flexo printing, a deep and screen printing (on a textile backing). The use of organic solvents is very low in these inks, but the use of pigments with heavy metals is still present.

Main advantages of these inks are low level of risk of fire and better conditions for printing taking into account the reduction of VOC emissions. The lack of these inks is that the drying time is extended, and the imprint that arises is with poor stability. 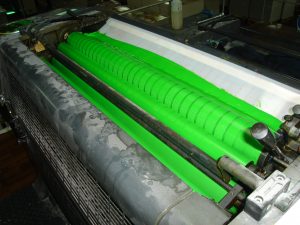 All major European producers are participating in the voluntary commitment made by the EU ink industry to protecting health and ensuring product safety. Soya and vegetable based inks also benefit the environment due to greater ease of removal from wastepaper during de-inking for recycling.

Also with UV inks a few manufacturers have succeeded in replacing up to 30 % of the ingredients that go into their formulations with renewable raw materials. From an environmental perspective, in connection with packaging it is relevant that only extremely small amounts of ink constituents migrate from the printed surface into the substrate.

Print coatings can also be regarded as unpigmented inks. Like Eco-inks, it is therefore also straightforward to use vegetable oil derivatives instead of mineral oils to make them. Dispersion and UV coatings are considerably less conducive to substituting renewable raw materials. In 2008, the first products based on naturally occurring resins and waxes reached the market.  Preference should be given to dispersion coatings that only contain very small amounts of ammonia.