Printing is essentially the process of images and text reproduced through a template or master form. If there is an invention so crucial and vital in the life of humans, it has to be the ability to print. Through printing we are able to produce in huge numbers magazines, newspapers, books, photographs, leaflets and many other publications. It has played the grand and vital role of promoting knowledge and literacy across the divide in basically any part of the world. 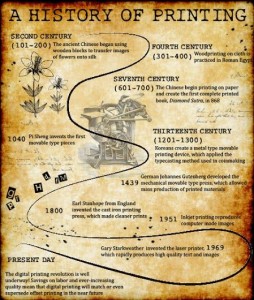 The history of printing is believed to start in East Asia, where the woodblock printing technique of patterns, images and text printing was highly in use. The technique started in China, mostly as a way to print on textiles before the same was done on paper. The earliest prints on cloth in China go back beyond 220 A.D. In contrast, Roman Egypt woodblock printing goes back around the 4th century. By the 9th century, China had started printing on paper with the first ever completed extant printed book with its own date printed by 868 A.D., known as the Diamond Sutra. More than 400,000 copies of Pictures and sutra copies had been printed by the 10th century at a time when the classics of Confucius were also in circulation. After this development in China, printing spread into Japan and Korea, where the Chinese logograms were used.

In Arabic Egypt, block printing developed in the 9th and 10th centuries, mostly for amulets and prayers. Most of them were not just printed on wood, but also on clay, lead and tin.

Block printing was the first form of printing to enter Europe, mostly as a way of printing motifs on cloth and by the 14th century, it was a common development. Mid 15th century saw woodcut books and block books being printed with both images and text, mostly carved on a single block and were mostly affordable alternatives to books and manuscripts printed on a movable printing method. 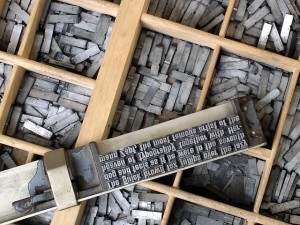 Movable printing refers to the typography and printing method that uses metal movable pieces made by matrices casting with letter-punches used for striking. The movable type of printing gave the printing world a lot of flexibility in contrast with block printing or hand copying. The first movable printing type was created about 1040, from porcelain, by Bi Sheng in China. Porcelain broke easily and by 1298 C.E, Wang Zheng had carved out of wood a durable movable type.

In 1230, metal type printing movables made of bronze were invented in Korea such as the bronze movable that published the Korean Jikji in 1377. 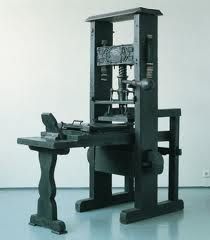 By 1450, the first modern movable printing type was introduced by Johannes Gutenberg in Europe,including crucial type casting innovations founded on hand mould and matrix. Gutenberg’s type pieces were created uniquely from alloys of antimony, tin and lead, which are still used today. After the printing of the Gutenberg Bible in 1455 and its low affordable cost, the superiority of the printing press and movable type printing by extension was established and spread around Europe and across the world. All movable printing types today derive from the innovations of Gutenberg.

Other modern printing developments today worth noting include xerography, developed in 1938, Inkjet printing 1951, Laser Printing 1969, 3D printing 1984 and Digital Press in 1993. Inkexpress.co.uk offers a whole host of modern solutions that cover a range of areas.