This tutorial is primarily related to work with colors and color in digital printing and is related to the work with Photoshop and similar programs for photo editing, and bitmap graphics. The theme color, scientifically speaking, is so extremely complex that only for the basics, we can write a whole book.

The phenomenon of colors

Celestial phenomenon that we all know: the rainbow. Her colors are known to all of us. But whence come these colors? What the colors actually are? 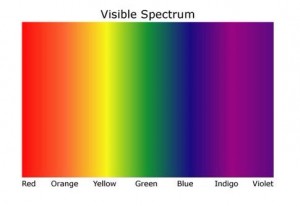 First question: “Provide colors of the rainbow in the exact order!”. Almost 90% of the interviewees will not give the correct answer. This question is not easy to answer even for the graduated graphic engineers.
We’ll give you a little hint: On the light spectrum, on the left side is Ultraviolet (UV) and on the right infrared (IR). Both colors are invisible for our eyes.
Now the order of colors should be easily concluded. In addition to the infrared is, as the name implies – the red. Next to ultraviolet is purple – here comes known to us magenta (not entirely correctly, as you will see, but it helps in orientation). Next to her is blue. In addition to the visible red is orange. Orange does not belong to important colors for us, but helps us to determine the next color – yellow. Between blue and yellow stays only the green color.
As the human eye is very good at distinguishing the green color, on the way to the blue we’ll add and cyan.  Now we connect this line of colors so that we get a circle that shows all visible colors of the spectrum and complete it with magenta. At this circle red should be on top. So we have 6 colors here and on every 60º we come to a new point – the so-called cardinal color. 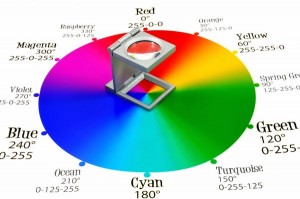 Those of you who have had the opportunity to meet with this terminology, will notice that we get two groups with 120º spaces:

The term “additive color mixing” and “subtractive color mixing” to beginners always gives a headache. It is of crucial importance for the understanding and later work with colors, good knowledge of these concepts.

Consider the following scenario: If in a completely dark room we turn on one light the room will be brighter. If we turn on the second and third light (no matter what color), it will become even brighter, because the addition of a light – meaning more lights is added. For us, the ” brightest color ” is white.

If the lamps were in the three primary colors – green, yellow and blue, then in the intersection area would become mixtures visible on the picture 3.

Mixing colors: If, for example, red light falls on the part of the area of green light, green will in any case become lighter.And indeed: yellow is brighter than both basic colors. What’s special, amazing and fascinating at the same time is that, although we did not use the yellow lamp, we got the yellow light. It was created by mixing two additive basic colors: red and green. If we add and blue color, then the intersection (yellow) will become even brighter and we will see white color.

But – this mixture occurs only in our eye, or rather in the brain. Our eye through three primary colors is experiencing different stimuli that with each color become stronger. If there is no lights or better said stimulus, than we see black. For this reason, additive color mixing is often called psychological color mixing.

Subtractive color mixing we know almost intuitively. This mixing of colors has been known to us since childhood.
When with watercolors we draw on white paper and applied an additional color, the area where the colors are mixed becomes darker and darker until eventually comes a black color. Each color that is added almost takes away a part of light from the paper, meaning subtract the color. In the same way is behaving an ink in office printer or ink in printer for large format printers. 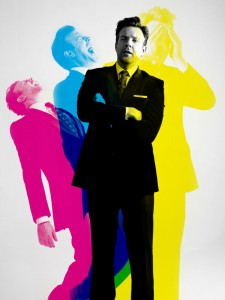 However, we must admit, the model of the circle is not yet complete. In fact, it should be seen as a double cone in 3D space. Then in the height, light can be seen. Thus, the white is at the top and black at the very bottom.

White would arise if all RGB colors glow with full intensity and black when all CMYK colors would be applied to the paper. Unfortunately, there are no absolutely pure pigments for that because their production is enormously expensive. In addition, it would be necessary to apply an inordinate amount of color to be able to print completely black color.

This is not only expensive, but soaks and soften the paper leading to delays in the process of printing. Because of these reasons it was decided to introduce a fourth color in the CMY system. It is a pure black color which is produced very easily and at relatively low costs. With her any color produced by mixing the CMY system can be further tarnished. Thus, the black color in becoming a “key” color and is marked with the letter “K”.