For many generations Kodak was synonymous with the term of photo movie and cameras. Today he is known for the thermal image setters of offset plates (CtP devices), and plates for offset printing, but did you know that Kodak with his solutions is involved in 50% of packaging in the world?

Kodak completely refocused its development in the printing industry, with special attention to the solutions for the production of packaging, and provides software and hardware solutions for all printing techniques that participate in the production of packaging. Especially interesting is that Kodak has CtP on which they can produce prints forms for all types of printing.

Kodak’s workflow’s Prinergy Evo and Prinergy Connect are highly respected product’s from all users of CTP. This is an extremely powerful tool that provides safety and quality at the very beginning of the production process. It is intended for all printing techniques and connections to various devices for the production of plates, as well as for digital printing. Kodak workflow is modular and adaptable to different needs of customers, fashionable and has Adobe Print Engine, which provides confidence that everything you will do in Adobe applications will be on printing form.

Kodak Trendsetter and Kodak Magnus thermal platesetters for printing plates (CTP) are the most common units in the market. Those are devices of exceptional quality and stability in operation. Because of safe plate repeatability they are loved by printers who print packaging because there should not be differences from one print to another job.

Kodak Trendsetter is best-selling and most respected CtP platform in the world, and on its basis the Kodak developed a new system for making photopolymer clichés.

Kodak Flexcel NX is the name for a new system for the production of flexo photopolymer clichés and was built on the foundations of Kodak Trendsetter. This system enabled Kodak sets new standards in flexoprinting because he moved present borders of flexoprinting and moves this technology closer to the quality of gravure printing.

At this same image setter Kodak Trendsetter NX can be illuminated and offset plates, so to printing houses that have two printing techniques gives a huge advantage because they can use only one CTP.

Printing house that has multiple printing techniques, such as flexo, offset, waterless offset printing, screen printing and typography (letterpress), can do all the printing forms at one CtP device.

Kodak has developed a new thermal digital film named DITR who is replacing the old analog film who can also be developed on the Kodak Trendsetter plate-setter. Kodak DITR not needs to be developed, fix, rinse and dry, but he is after illumination ready for use.

DITR is used everywhere where has been using an analog film before like in typography (letterpress), screen printing, etc., and the results are much better when compared with analog film. 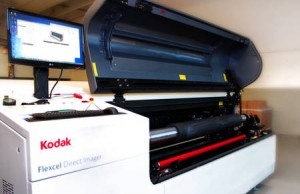 A step away is being created by the machine for direct laser engraving Kodak Flexcel Direct which engraves printing forms on elastomer. It is a new generation of flexo printing forms for those who look for best results in printing of packaging ambalage. Of all the manufacturers of this technology Kodak has achieved the best quality that is comparable with all digital flexo plates called LAMS.

Kodak Nexpress is a machine which is closest to the process of offset printing, the prints are also entrusted (closest) comparing to printing, and the stability and uniformity exceed offset printing.